You are here: Home / Uncategorized / Behind the Breakdown: Casting from the Eyes of the Producers

Behind the Breakdown: Casting from the Eyes of the Producers 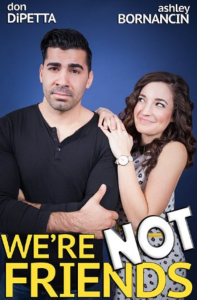 As an actor, it sometimes feels like you are on a hamster wheel—submitting for auditions, going to auditions, booking or not booking jobs. Cycle, rinse, dry, repeat. But, as a content producer, you change the game. You decide what you role you’ll play, how you want to write and produce it, and of course, who to cast. This time, I got to be on the other side of the breakdown, and our takeaways were absolutely bananas.

My writing partner, Don DiPetta and I decided to take our career into our own hands this past year and while we still wore our “actor hats” we also took on our writer, producer, director and overall content creator hats, to create and produce our up-and-coming SAG New Media Series, “We’re NOT Friends,” and wanted to share some takeaways we thought you might find helpful along your journey as an actor.

As an actor, being able to go through this casting process opened my eyes to the difficulties and responsibilities that casting directors have to go through on a daily basis in making these hard decisions that most actors are generally unaware of. I truly respect the expertise required to do this professionally and urge actors to trust the decisions made by casting directors.

From 3,000 Actors to 130
Like any casting director, we released our SAG New Media series on breakdowns for our submission process. We knew that under the new media contract, there were going to actors who weren’t willing to work for deferred pay… but still received 3,000+ submissions on our 8 new characters.

You would think that with thousands of submissions we wouldn’t have time to go through each one… but as actors ourselves, we knew that there was talent everywhere…so one-by-one, we went through submissions all the way from top agencies like Paradigm and Gersh down to non-repped actors.  Gersh’s comedy department even reached out to us to get our script.

To systematize it, Don and I would first separately go off of first impressions and categorize each person that just caught our attention off the bat (this is where headshots are so important and creating images that pop!) in our first, large group of considerations, narrowing down 1,000 submissions for a role to about 70 candidates. Then we would go through and really watch the slate shots, take a quick look at their reels and look at their other headshots. From here, we narrowed the pile to about 25 per role. Then we would go in and take a deeper look at their reels, watching more scenes and really analyzing if we saw them as the character or not, narrowing the pool to about 15-20 per role. Hooray!

After countless hours of doing this, we sent out our Eco Cast (self tape) request to our 15-20 actors per role.

What’s the Short List and How to Be On It
You always hear the need to be top of mind in the industry, and the way to do this is by networking and building genuine relationships that you hope to maintain throughout your career. Through networking, engaging with us on social media, emailing us directly, or meeting us in class or workshops together, etc., we already had our short list. It was incredibly easy to put together because we have such talented friends already, so we immediately had 5-10 people per role who we liked and worked with that we wanted to see. Our goal as actors should be to get on this short list!

Dos and Don’ts In the Submission Process:

When the Majority of Actors CHOOSE to Miss the Opportunity
So remember when I said 3,000 people submitted total? After all the work we put into hand-picking actors of all types and ethnicities, with any number of credits, some represented by big agencies, some without representation, nearly half of the actors WHO RECEIVED THE AUDITION never submitted a tape.

This frustrated us because that opportunity could have been given to another actor who would have actually submitted an audition tape. We understand that our deferred pay series may not be as appealing as the big time auditions, so we weren’t TOO surprised, but if you aren’t going to go to the audition – why submit in the first place?

What WAS cool was that there were a number of our actor friends (with huge TV and film credits, with whom we loved working) who were overjoyed to work on our material, who were emailing us individually asking to read the script and send in a tape, who followed up with us on where we were at in the casting process, if we saw a fit, etc. And when it came down to it, we still had to really analyze who would be right for each role, because we had about 5-7 wonderful audition tapes each of actors who could have easily played those parts.

A big thank you to all who:
– Sent in their tape early
– Worked really hard on the material and truly made it their own
– Were communicative during the process, responded to emails in a timely manner and respected deadlines.
– Were interested and saw the potential of our baby.
– Were genuinely excited to also put their heart and soul into our project.

After re-watching tape after tape though, it became obvious who just WAS that character. These actors ironically generally ended up being the ones who sent in their tape early, who (for the most part) HAD credits and who were very responsive and proactive.

This doesn’t surprise us though. Someone who takes their craft seriously and who sees this industry as a business will treat it as such, and the more professional you appear, always trying to improve your craft and product, the more the industry will cater to you, and the more people will want to work with you.

I truly believe that if you are a cool person to work with, casting will WANT to try to find a role for you, even if it’s not right at the time. We have so many actors we just WANT to hire but we know they’re not right—right now—but they are definitely in the back of our heads for future roles.

If this casting journey has taught us anything, it’s that we have so much respect for casting directors and what they do. It is such a huge responsibility to find those truly stand-out actors for those break-out roles and casting directors aren’t given enough credit.

As actors ourselves, we hope our take-a-ways from this process can help your mind and heart feel more settled in trusting the whole casting process. We aren’t going to be right for every role, and even roles we think are PERFECT for us may not fit us beyond the knowledge that we have. But it is important to remember that if we keep creating and producing quality work, keep honing in on our business skills and craft, and start seeing our journeys as long-term careers, it will pay off.

But really… why wait to be cast?
What may be even more important to keep in mind is that you have your own unique voice that no one can take away from you…so while you are hustling from TV to film to commercial auditions… pick up your pen (or computer or smart phone, who uses pens anymore?) and start writing your own part. After all, huge stars (Mindy Kaling, Lena Dunham, etc.) have been born from writing their own roles, and it would have been such a shame if they hadn’t shared their gifts with the world. Don’t let your life go by without sharing your gift, whether someone casts you or not.